Last Wednesday (14/6) I presented my master thesis entitled Multi-level
and Multi-scale Modelling: From Adipose Intracellular Insulin Signaling to Whole Body Metabolism and
Weight Alteration. This presentation included a brief explanation of all my
work here as a part of ISBGroup. I started my journey here as an intern already
in the summer of 2015 following the bachelor course. Back then, I worked with a
project involving the development of a model describing the intracellular signalling
chain in rat adipocytes. The internship lasted for two months, but the project
went so well, that I decided to continue the work alongside my studies. One and
a half year after the start of the internship, the project successfully resulted
in a published article. Around that time, I was supposed to start writing my
master thesis, so it felt natural to continue on this track. So, by using the
newly developed intracellular model as a base, I continued the development towards
a first multi-level and multi-scale model in rodents. The abstract from my
master thesis is attached below.

Type
2 diabetes, T2D, is a prevalent, costly disease that affects millions of people
worldwide. It is a complex metabolic disorder which is characterized by insulin
resistance. The resistance is believed to initially arise from adipose
intracellular malfunctions and later spread to adjacent tissues, eventually
affecting mechanisms on multiple body levels. To handle this complexity,
mathematical models has been developed through systems biology modeling. These
include models, in both rodents and humans, that describe mechanisms on single
body levels, as well as more advanced models that describe T2D associated
mechanisms on multiple levels. However, these multi-level models have so far
mainly revolved around humans, and no such model focused around diabetes in
rodents has yet been developed. Animal models possess many benefits, like
processing valuable animal data that is difficult to obtain from human
experiments, or act as replacement for test-animals. For these reasons, a first
multi-level and multi-scale rodent model has been developed that describe
mechanisms on multiple levels; from the intracellular level (the adipose
insulin signaling chain from the insulin receptor, IR, to the GLUT4 transporter)
to the whole-body level (including the glucose-insulin metabolism and weight
change). Experimental data was obtained on these various levels, and used to
improve and test the model. The intracellular section of the model was created
through a connection of two existing models and can describe over 140
experimental data points. It was also validated with independent experimental
data and was used to form predictions about the relative contribution of the
pathways from IR to GLUT4. The new multi-level model was developed after new
connections was established between this intracellular model and a model
describing meal responses over a couple of hours, as well as with a model
describing weight change over days and weeks. The resulting multi-level model
have created insights to what mechanisms are necessary in order to simulate
data on all levels. The model also aims to increase the mechanistic
understanding of T2D and eventually provide a contribution to the drug
development process, by reducing the amount of animal trials and increasing the
success chance of the developed drugs. 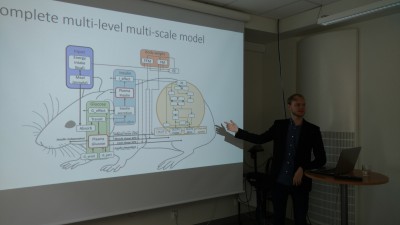