During the autumn we have three new students in our group 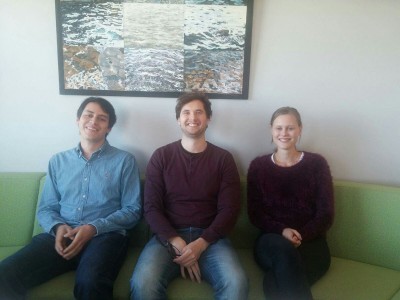 Nicolas, Fredrik, and Johanna: The latest students to join our group.

I’m
a student at Linköpings university, studying for a masters of science in
engineering biology, I have finished my third year but have decided to take a
break to work as an intern at the ISB group.

The
project I’m involved with at the moment revolves around studying the regulatory
mechanisms that control the antioxidant levels in the body. Antioxidants are
generally believed to be unregulated and simply accumulate upon continuous
intake and such an accumulation could help explain the many health benefits
observed when eating antioxidant rich foods. However this accumulation has
never been observed for more than a few hours after intake. The results of
previous studies show that there is reason to believe that the antioxidant
levels are regulated by homeostasis. The purpose of this project is to use
systems biology to investigate the regulatory mechanisms involved with
antioxidant metabolism and see if there is a homeostatic regulation of the
body’s antioxidant capacity. This project will continue and expand upon the
project I did for my bachelor thesis in the spring of 2016 where I investigated
the regulatory mechanisms that control the antioxidant capacity (AOC) in the
cytoplasm and used mathematical modelling and prediction analysis in order try
to predict how the AOC levels would change after a single dose of antioxidants
are given to a test subject. At my disposal i had access to data collected from
experimental studies conducted at Newcastle university. With the results from
my bachelors project I was able to provide the team in Newcastle with a decision
basis for how to design a new experimental study which they conducted in the
summer of 2016. I will use this data, collected from the latest study in
Newcastle to continue investigating how antioxidant capacity is regulated and
also investigate how different test subjects react differently using nonlinear
mixed-effect modelling.

My
name is Fredrik Eklund and my background lies in bioengineering, with a focus
on materials and biosensors. I’m currently working on my master’s degree thesis
in the field of systems biology, however. The project I’m involved in is a
continuation of previous students’ work on a statistical heart attack model. It
is a predictive model meant to be used as decision support by doctors. In its
core, a Bayesian network is trained to understand relationships between a large
number of parameters. The trained network is then used on a new patient’s
measurements for prediction. Based on the result, a medical practitioner can
then take the appropriate course of action.

Johanna
My name
is Johanna Fridberger and I am a new member of the ISB group. I will be staying
for one semester conducting a project on the model developed by Fianne Sips described
in the article ”Model-Based Quantification of the Systemic Interplay between
Glucose and Fatty Acids in the Postprandial State” in which I will exchange the current NEFA (Non-Esterified Fatty Acids)
part of the model to one that better describes physiological conditions. This
is possible thanks to new data on NEFA homeostasis. I am doing the project as
part of my education in medicine at Linköping University, now reaching the end
of the third year. I have really enjoyed working in this group so far, and I am
excited over the next couple of months here!