A couple of weeks before defending a thesis, it is common that the PhD student nails their thesis to a log in some of the common areas of the university. This is done to annouce that the student intends to defend their thesis and that anyone who wishes may read it and attend the defense to ask questions. The nailing is then celebrated with delicious cake.

I, Karin Lundengård, have now nailed my thesis ”Mechanistic Modelling – a BOLD Response to the fMRI Information Loss Problem” and I will defend it on the 30:th of November, 13.15 in Hugo Theorells sal (Northern Entrance, Floor 9). My opponent will be Kamil Uludag, Associate Professor at the Faculty of Psychology and Neuroscience at Maastricht University in the Netherlands.

Anyone who wants to attend the defense is welcome. 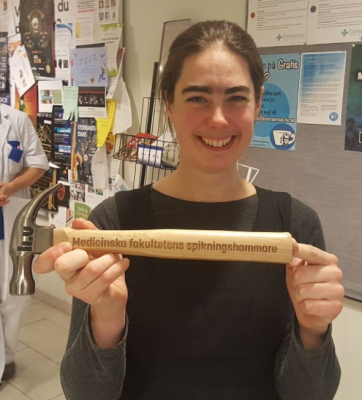 English abstract:
Functional Magnetic Resonance Imaging (fMRI) is a common technique for imaging brain activity in humans. However, the fMRI signal stems from local changes in oxygen level rather than from neuronal excitation. The change in oxygen level is referred to as the Blood Oxygen Level Dependent (BOLD) response, and is connected to neuronal excitation and the BOLD response are connected by the neurovascular coupling. The neurons affect the oxygen metabolism, blood volume and blood flow, and this in turn controls the shape of the BOLD response. This interplay is complex, and therefore fMRI analysis often relies on models. However, none of the previously existing models are based on the intracellular mechanisms of the neurovascular coupling. Systems biology is a relatively new field where mechanistic models are used to integrate data from many different parts of a system in order to holistically analyze and predict system properties. This thesis presents a new framework for analysis of fMRI data, based on mechanistic modelling of the neurovascular coupling, using systems biology methods.
Paper I presents the development of the first intracellular signaling model of the neurovascular coupling. Using models, a feed-forward and a feedback hypothesis are tested against each other. The resulting model can mechanistically explain both the initial dip, the main response and the post-peak undershoot of the BOLD response. It is also fitted to estimation data from the visual cortex and validated against variations in frequency and intensity of the stimulus. In Paper II, I present a framework for separating activity from noise by investigating the influence of the astrocytes on the blood vessels via release of vasoactive sub- stances, using observability analysis. This new method can recognize activity in both measured and simulated data, and separate differences in stimulus strength in simulated data. Paper III investigates the effects of the positive allosteric GABA modulator diazepam on working memory in healthy adults. Both positive and negative BOLD was measured during a working memory task, and activation in the cingulate cortex was negatively correlated to the plasma concentration of diazepam. In this area, the BOLD response had decreased below baseline in test subjects with >0.01 mg/L diazepam in the blood. Paper IV expands the model presented in Paper I with a GABA mechanism so that it can describe neuronal inhibition and the negative BOLD response. Sensitization of the GABA receptors by diazepam was added, which enabled the model to explain how changes to the BOLD response described in Paper III could occur without a change in the balance between the GABA and glutamate concentrations.
The framework presented herein may serve as the basis for a new method for identification of both brain activity and useful potential biomarkers for brain diseases and disorders, which will bring us a deeper understanding of the functioning of the human brain.