Corren-article and debates with colleagues

Late last year, we were featued in a news article in the local news paper: Östgöta correspondenten (often referred to simply as “Corren”). The news article can be seen in the picture below, and it deals with research developed to replace animal experiments, and argues that Linköping university probably is the leading university on this topic in Sweden: we e.g. have a clear 3R-policy, have strong researchers in the area, and both of the two most prestigeous prizes from the Stockholm-based “Swedish Fund for Research without Animal Testing” called “Nytänkaren” has gone to researchers who (at the time) were located in Linköping. The article then goes on to feature an interview with me, and on our type of research: how mathematical modelling can and is replacing animal experiments. 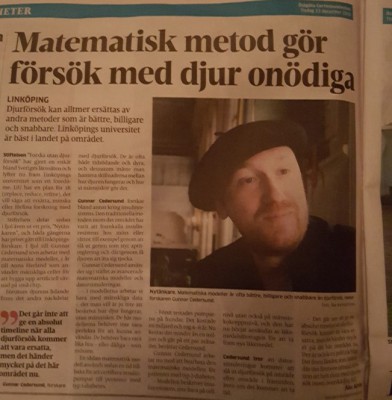 This is not the first time we are featured in media lately. In fact, there have probably been written some 10 news articles in different media on this aspect of our research following our award in late 2015, and they have all been very similar. Most often, the reactions have been very positive, and congratulory, showing appreciation and a new hope over these new possibilities. Similarly, many researchers who have heard my lectures have also been very enthusiastic, and a common reaction nowadays is something like “I had no idea about these recent breakthroughs; I now feel that I lag much behind in my methodology, since I don’t use modelling; what can I do about that?”. This time, however, was the first time these things were featured in Corren, and perhaps for this reason, many of my colleagues read it, and some of them (mostly researchers who themselves do a lot of animal testing) reacted negatively to what it says. I don’t know all that was said about it, but some of the reactions I heard indirectly said that “one shouldn’t write that replacements of animal experiments are possible, since this will lead to the public mandating that this happens generally”. One colleague wrote an email to me directly, stating some specific and somewhat similar concerns about the artice. To this colleague, I wrote a detailed reply, which then led to us writing some rather long exchanges back and forth. All in all, this has now resulted in about 20 pages of text back and forth, dealing with different aspects on this topic.

Since much of these concerns are concerns and thoughts that I have heard many times before, and which most often are based on mis-understandings of what (sound) modelling is about, or in an unawareness of what the most recent developments actually entail, our exchanges have resulted in a growing resolve on my side to do something about this unawareness. To give a little bit of perspective on that: in all previous appearances we have made in the public world, the initiative has always come from some other source; we got the initial award “Nytänkaren” without even applying for it, and in all following media appearances, we have just responded to invitations, to give presentations, to do interviews, etc. Now, however, because of these exchanges, I have realized that I do feel quite strongly about these things, and that I really am concerned about all the mis-conceptions that are floating around (perhaps especially in the biological research communities) concerning what modelling can and cannot do, not only but also in relationship to animal experiments, I am hereby opening a new category in our blog, called “3R and animal experiments”. In this category, I will feature my thoughts and news concerning this exciting topic, and it is intended for both colleagues and for the interested public. Then all exchanges will be public for all to see immediately.

In general, I also want to state that I think that these kind of debates is exactly what I think that science should be about: on topic, honest, and sincere discussions, where ideas can be compared, exchanged, improved, refined, and viewed for all to see.

To start this off, I am attaching the 20 pages of emails below (also including a powerpoint presentation with some figures). That text, however, is pretty long-winding, and in Swedish. Therefore, many of these points will be summarized and explained more simply/clearly in shorter following blog-posts and youtube-videos, which also most often (but not always) will be in English. So stay tuned for that!

Part 1, text from colleagues in italics

Part 2, my colleague’s response to my reply in italics (written then, as a continuous text, without specific replies to my points), upon which I replied in the same way as the first time, by breaking down the statements in small bits, and answering to them one-by-one.

Part 3, final part of the interchange (so far), same structure as above.

Part 4, powerpoint with the figures alluded to in the initial answer (Part 1, above).