A couple of days ago, Gunnar Cedersund held a presentation at the local event “Linköping vego”, which is a little festival on vegetarian-related topics, featuring around 300-500 attendees, 10-15 lecturers, and 10-15 exhibitioners. Gunnar’s lecture was in the “Blanche Lindgren” seminar series, which featured 4×40 min lectures on topics related to research without animal testing. The 4 lectures complemented each other: the first, by Karin Gabrielson Morton, featured an overview of the field as a whole, some historical examples of breakthroughs, and also an overview of the organizing body, the Swedish Fund for Research without Animal Experiments; the second presentation was the one by Gunnar (picture below), who talked about how we and others use mathematical models to reduce and replace animal testing; the third presentation was held by Anna Herland, who is the newest recipient of the same prize that we got the first edition of, “Nytänkaren”, and she works with organ-on-a-chip developments for the human brain; the final lecture was held by Kathrin Zeller who is a member of one of the flag-ship groups for the research fund, which involves an animal-free test for whether a new skin product is likely to lead to allergic reactions. Apart from spanning 4 interesting directions of biomedical research, there were also natural overlaps of interests between us: Anna’s organ-on-a-chip might allow us to test some of our hypotheses regarding how the brain’s fMRI signal is created on a cellular basis, and Kathrin’s omics-based tests for the immune system might complement our own exciting plans and projects on the same topic together with AstraZeneca. 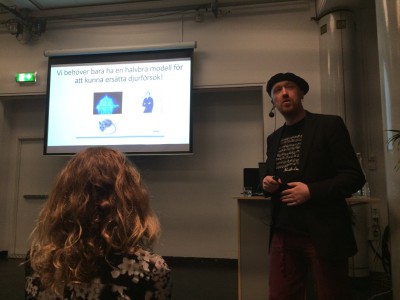 Picture of me in the perhaps most central slide in the whole presentation. The slide illustrates with a simple thought example that a model does not have to be perfect to provide a valid replacement of test animals – it just has to be comparably good/bad as the corresponding animal test. Then, because computer simulations are so much faster and cheaper (among other things) than animal testing, the switch will happen automatically, especially in the industrial sector, which typically switches immediately, if there is money to save. There are already examples where this has happened.

At the event, we also made some initial plans for how to feature ourselves at this year’s edition of Almedalen, to which we this year might go jointly as a group. More on that to come! 🙂