We have gotten money – and lot’s of it!

While on a 6h train ride between Malmö and Stockholm, I at last have time to share some of the good news that have come to us, one after the other, but that I haven’t had the time to share with you here until now. The good news is that we have had a series of successful grant applications, which mean that we now have reached a whole new level, in terms of money flows, and that our group will significantly grow in the next 2-3 months.

This new money
flow actually started about a year ago, when I got money for a new 2
year postdoc position from AstraZeneca, i.e. approx 3 MSEK (300 000
USD). In this postdoc, we will create models for a new type of
animal-free experiments, called organ-on-a-chip. In this technique, you
build a system of realistic 3D organs made up of human cells, which are
interconnected by an artificial blood flow. This is a supercool
possibility, which is ideal for both modelling, for replacing animal
experiments, and for understanding diseases.

This grant was then
followed by a new EU project, called PRECISE4Q, which was approved in
January this year. In this project, we will make use of our multi-level
mathematical models for diabetes and cardiovascular disease, to create a
new clinically useful tool. The basis of this tool will be quite
general, and applicable to a wide range of diseases, but the focus will
be on helping patients who have or who are at risk of suffering a
stroke. The total budget of this project is 60 MSEK (approx 6 million
USD), and of that approx 4 MSEK goes to my group (400 000 USD).

First off was an application to SSF, the Swedish Foundation for
Strategic Research. They have awarded me and a researcher from
Karolinska Institutet in Stockholm (Roland Nilsson) a grant of 7.5 MSEK
in total, out of which I will receive 3.5 MSEK (~350 000 USD). The topic
of this project is to use my modelling to extract quantitative fluxes
for all of the metabolic reactions in a cell; this is possible because
of Roland’s unique experimental skills, where he tags metabolites
outside of the cell with C13 carbon molecules, and then uses mass
spectrometry to measure where these tagged carbon molecules ends up in
all in metabolites inside the cell. We will use these money to both
transform this tool from a big potential to something that is useful in
practice, and then also to apply the technique to understanding both
metabolic diseases and cancer on a new level – useful for both research,
drug development, and diagnosis.

The last major grant we got,
and just a few days ago, this Thursday, was from VR, the Swedish
Research Council. This high-prestige grant builds upon my previous
collaboration with AstraZeneca, and will allow us to spend 4.2 MSEK (420
000 USD) to further strengthen our collaboration with AstraZeneca. More
specifically, we will make use of the new and more complete models
developed within the PRECISE4Q EU network (mentioned above) to
understand how a brand new diabetes drug, dapagliflozin, works, and if,
how, and when it can be used to also treat cardiovascular diseases like
stroke, heart attack, and heart failure. This project will also allow us
to understand more about which patients that should have which
treatments, and more about the different mechanisms at play in the newly
sub-divided grouping of diabetes into 5 sub-types.

One very good
aspect of this new situation is that we are really well-prepared for it.
This is due, in part, to some very useful grants we have gotten from the Swedish Foundation
for Research without Animal Experiments. Using this money, we have been
able to train talented undergraduate students in real research projects,
which they have done in parallel to their M.Sc. studies, by awarding
them scholarships (several of the recent blog posts have been devoted to presenting new such students). These new, and previous old, such quite unique students are now ready and eager
to start as Ph.D. students, and they are much more well-trained than
normal applicants would be, which we could find in normal open
announcements. For this reason, we already now know that we will be able to
fill all of the new positions with really great people, and are therefore
looking much forward to working with for, at least, the next 4-5 years. However, all of the new positions will be announced in open competition, so if you are a great candidate, who wants to join our group, don’t hesitate to apply, or to contact me for discussions on joint collaborations or positions.

All in all, it is also a very great feeling to suddenly have such
much money now at our disposal. And also quite humbling. Now we need to
really demonstrate to our funders that we can convert these great money into the equally great
research we have described in our visionary applications. Into research
that will be useful for both other researchers and for those who want to
develop and use new and improved treatments – both treatments such as drugs, and
treatments such as yoga and meditation. It will be great fun to enter this
next step in our group’s development! 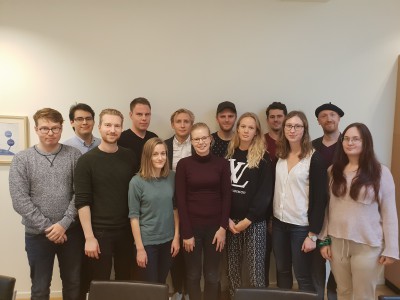 This
is a picture of our group during a recent group meeting. Not all were
there, but most of them were. Some of the people in the picture are
excellent M.Sc. students in the end of their studies, who we now can
offer 2 Ph.D. positions. Apart from that, we will
hire two new people, one new Ph.D. student, and one postdoc, but also those will probably be recruits building on previous collaborations and projects. To help as manage all of these new people, we are also very fortunate that Gunnar’s second-in-command in the group, Associate Professor Elin Nyman, now is due to come back after an almost 2.5 year long leave in Harvard,
Portland, and an almost 1 year maternity leave. For all of these
reasons, made possible thanks to the new money described in the post
above, our group will now take a step up to functioning on a new level –
one with more senior people, more people financed fully by the group itself, and with
long-term funding secured. Now we will be able to fully focus on all of
the great research projects we are working on, without worrying if the money will ebb out in the middle of the project!